Back to Technology & Innovations

At EnerMech, safety is integral to every aspect of our operations and we drive an incident free workplace. It is commonplace on LNG plants that some catalysts require unloading and loading under inert conditions to exclude air and avoid pyrophoric ignition and catalyst damage. Nitrogen is commonly used for this purpose with extreme risk to personnel.  We have found a better way and have pioneered a robotic catalyst unloading and loading tool called EnCat. EnCat negates the requirement for manual handling, high-risk confined space operations and inert breathing apparatus systems, mitigating the risk of engulfment, asphyxiation and manual handling injury and fatigue.

The EnCat technology comprises of two main parts: EnerVac, an automated unloading tool that removes catalyst from reactors via vacuum, without any entry into the vessel during unloading; and EnCat, an automated loading tool that loads catalyst directly from drums into the reactor, without entry during the loading activities. Both are programmable to avoid any obstacles within the vessels, such as temperature probes. 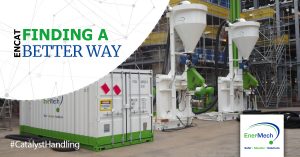 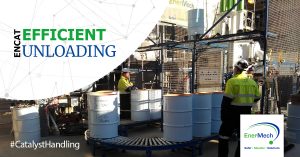 In addition, EnerMech has pioneered the use of Zymeflow® for catalyst decontamination.  Through vapour phase decontamination Zymeflow® removes hydrocarbons and LELs from within the catalyst eliminating the need for inert entries and allowing unloading activities to be completed faster. The process is quicker and generates minimal effluent when compared to current market practices of hot nitrogen stripping or water flooding. Reactors can be declared LEL free in as little as 12 hours, with permanent oxidisation of H2S and pyrophoric material. Customers benefit from immediate schedule, safety and cost benefits, and, once the media is removed, greater flexibility for transport and disposal/recycling the benign spent (but clean) media.

On a recent shutdown, EnerMech’s multi-disciplined team delivered integrated services with a focus on safety and operational excellence.  Using EnCat, we reduced personnel on site significantly improving safety throughout.